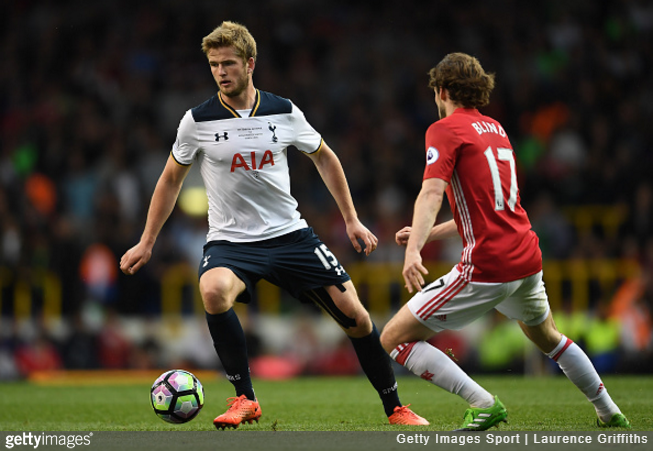 According to the morning tittle-tattle, Eric Dier has rocked the very foundations of Tottenham Hotspur Football Club by informing them he would like to join Manchester United before the start of the season.

The story appears in the Guardian, who posit that United have been making come-hither eyes at Dier all summer despite having been told by Spurs chairman Daniel Levy that the midfielder is categorically not for sale.

Dier is “open to the prospect” of joining the club he supported as a boy, while the Express add that he’s told close friends (the true arbiter of any football transfer) that he’s desperate to work with Jose Mourinho.

The 23-year-old has apparently become Mourinho’s “No.1 midfield target” after United’s snatch-and-grab capture of Romelu Lukaku from underneath Chelsea’s noses all but ended their chances of being able to sign Nemanja Matic from the Blues.

Levy may face a dilemma when United’s offer is broken down. They are considering making a second offer of £50million for [Dier] and would more than double his £70,000 weekly wage, taking it beyond Tottenham’s £100,000 ceiling.

Mourinho sees Dier has a solid long-term replacement for Michael Carrick, who was made United club captain yesterday as he heads into what may well be his final season at Old Trafford.

United certainly seem eager to push this one through, but is Dier really a £50/60million player? The current market is bonkers, but even that seems a little rich for a fairly mundane central midfield utility man.