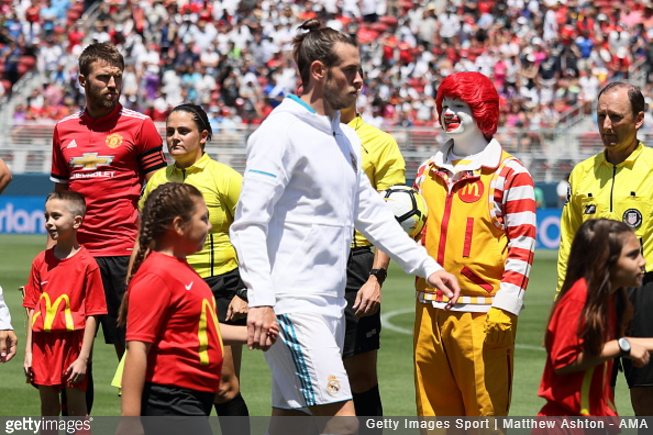 The symbolism was on point as none other than Ronald McDonald himself was charged with leading both the Manchester United and Real Madrid players out of the tunnel for Sunday’s International Champions Cup friendly in San Francisco.

Sure enough, the world’s premier fast-food harlequin escorted the two teams out of the tunnel at the Levi’s Stadium, resplendent in gaudy red and gold…

Only in America would Ronald McDonald lead out the teams at the start of a match 😂😂 #RMAMUN #MUTOUR pic.twitter.com/QIhGfhMOn7

A more succinct appraisal of the International Champions Cup and its prestige you’re never more likely to see.

The match itself finished 1-1 inside 90 minutes, with Anthony Martial doing some impressive penetrating down the left flank to lay on a tap-in for Jesse Lingard…

Casemiro then levelled for Real with a 69th minute spot-kick before the whole shebang went to a fairly risible penalty shoot-out, which United won 2-1.

The win sent United top of the ICC table, should you happen to be remotely interested.