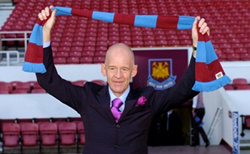 It’ could be a tale of two chairmen if Carlos Tevez completes a move to Man Yoo later today â€“ apparently he’s completing a medical in Venezuela in a deal that could eventually be worth more than Â£30m.
It’s understood that Tevez will join United as part of an initial two-year loan deal with West Ham receiving some compensation to cover the complexities surrounding his ownership. And the Premiership want any transfer funds to go to West Ham in case they look like they’re trying to cover up third-party agreements.
If that’s more than the Â£5.5m West Ham were fined for allowing Tevez to single-handedly keep them up, West Ham will be laughing â€“ but more ‘Egg’ in the face for Wigan’s Dave Whelan?