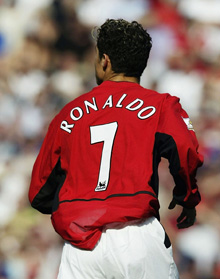 Is it just me, or does Cristiano Ronaldo have a new free kick routine?
The twinkle toed winger seems to have taken a leaf out of Jonny Wilkinsonâ€™s dead ball warm up with some strange posturing over the ball before he predictably launches a speculative shot into the stands .
It involves a wide stance with arms angled straight out at the sides and a puffed out chest from the Cantona school of thought â€“ although the crown prince still has some way to go before he can be considered The King.
Is it some sort of sporting callanetics or just self indulgent swaggering now he knows that most cameras will be following him this season?