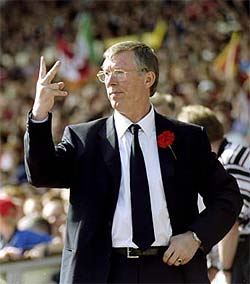 Ah. Bless Sir Alex Ferguson. He’s ranting about referees again. He really doesn’t like ’em does he? Maybe it was a ref’ who was chopping at his ankles the other day? Anyway, Sir Alex has expressed displeasure about the appointment of the German referee Herbert Fandel for the return of Cristiano Ronaldo and Nani to Sporting Lisbon tonight.
Fandel, a trained pianist, has twisted Fergie’s melon on several occasions in the past few seasons and the Manchester United manager put his head in his hands, sighing melodramatically, when he was asked about UEFA’s choice of officials. “Have we got a supply of Mogadon?” he said. What has Fergie got against the nimble fingered card waver?

Ferguson’s dislike goes back to a 2-1 defeat to Porto in 2004 when Roy Keane was sent off and, at the final whistle, Ferguson refused to shake hands with Jose Mourinho because he was furious about what he took to be the home side’s diving. Ha! Sorry. I’m laughing at the irony. Fandel also sent off Paul Scholes when United lost to Roma in the Stadio Olimpico last season, and the Scot accused him at the time of favouring the Italians.
United’s manager is especially sensitive at the moment because he believes his team, and Ronaldo in particular, have had a raw deal from referees this season. Ronaldo was sent off for clashing with Richard Hughes of Portsmouth in the opening week and was booked for a dive in Saturday’s 1-0 win at Everton – but Ferguson feels that the winger was innocent on both occasions.
“It’s worrying for us because it feels as if he is being punished for his success and I don’t like that at all,” he said. “In my mind – and in a lot of people’s minds – there has been a lot of unfairness.” Ronaldo agreed. “What the boss says is true, but I don’t want to speak about referees,” he pointed out while preparing for his first game back at Sporting since signing for United in 2003.
Well. I certainly don’t want to get in any trouble with ManYoo officials… so I’m relying on you PieHeads. What do you make of all this? Pull no punches pals!