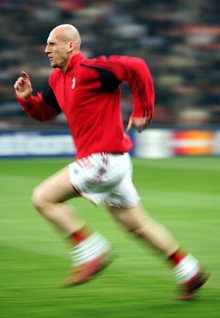 Man mountain and Easter Island lookalike, Jaap Stam, has called an end to his playing career because of injury and a lack of focus.
He apparently considered quitting Ajax at the start of the season but was convinced to stay. Unfortunately, physical problems have continued and the big Dutchman no longer feels he has the concentration that made him one of the gameâ€™s most uncompromising defenders.
Weâ€™ll remember him best for his time at Man United where he was the bedrock of the clubâ€™s treble winning season before falling foul of Fergie for suggesting he was tapped up in his autobiography.
Stam was moved on to Lazio and then joined AC Milan where he reached another Champions League final before ending his career in his homeland with Ajax. Stam also won 67 caps for his country and acored three goals before retiring from international football after the Euro 2004 finals. Will he be remembered as one of the great defenders?
Click through for a video of some of his best moments