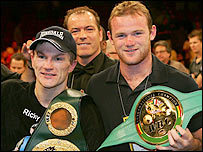 Wayne Rooney is good mates with Ricky Hatton, despite the fact that Hatton is a massive Man City fan and Roo plays for United â€“ their friendship conquers such tribal divisions. Rooney, who has carried Hatton’s world title belt to the ring before, is absolutely desperate to attend his mate’s fight against Floyd Mayweather in Las Vegas this Saturday.
There is one small problem â€“Â Man Utd are playing Derby County at Old Trafford on Saturday (kick-off 3pm), and so Rooney will be busy. It has been reported that he has asked Alex Ferguson for permission to go to Vegas, but I doubt very much that Fergie would let him go.
UPDATE Rooney now appears to have accepted that he won’t be in Vegas for Ricky’s big night, saying: ‘I’m gutted I won’t be going this time but I wish him all the best, along with everyone else back in England, and hope that he comes back victorious.’