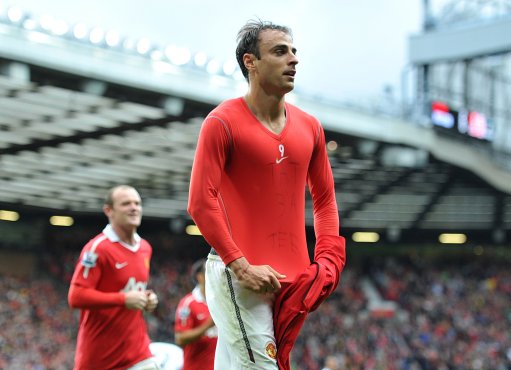 Dimitar Berbatov – not a ‘weights man’

After enduring two years of resolute indifference from the terraces, Manchester United striker Dimitar Berbatov (or Flopiflop Flopbaflop, as he was known up until about five weeks ago) has finally started to win people round – netting seven goals in six games, and generally beginning to play like a £30 million signing should.

Berba’s secret? Bionic limb implants? A one-way death pact with the dark lord himself? Perhaps an uber futuristic Ivan Drago-style steroid-fuelled Cold War montage sequence?  Well actually no, his secret seems to be…running around a bit during the summer;

“I have worked hard on my fitness – so hard. I’m not a ‘weights guy’ as anyone can see from my body but I have been trying even to work on that. I ran six miles every day in the close season.

My routine was to watch a World Cup match and then go for a run. Then I would watch another game then go out and have another run.”

I still prefer to believe it was the montage option. Just squint your eyes and try sub Berbatov’s refined Bulgarian features in for Dolph Lundgren’s massive oblong noggin…