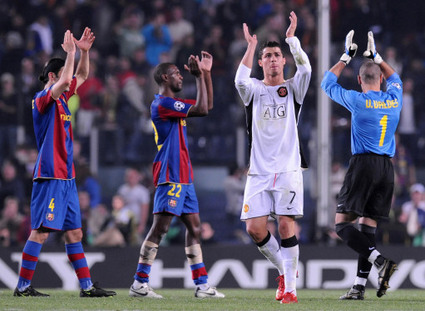 BARCELONA
ValdÃ©s Rarely called on, had no say in Ronaldo’s penalty miss. 6
Zambrotta Showed his pedigree and almost scored with a killer shot from range. 7
MÃ¡rquez Very fortunate to get away with a foul on C-Ron in the area. Otherwise solid. 6
Milito Unlucky to give away the penalty so early on, but recovered well and teamed up well with Marquez. 6
Abidal A reliable outlet on the left flank, where he made some athletic runs. Rarely called into defensive action, but did his job well. 7

Xavi Couldn’t quite unlock United’s defence, but had a fine night. Masterful in possession. 7
Yaya TourÃ© On his way to becoming Europe’s premier holding midfielder. Quick, strong, intelligent, competitive, and also prepared to get forward. 8
Deco A throwback performance from one of Barca’s forgotten men. Got the better of Paul Scholes. 7
Messi Mesmeric in the first half, eclipsing Ronaldo, but faded a little and was rightly substituted with half an hour to go. 7
Eto’o Quiet for much of the game, largely thanks to an inability to climb out of Rio Ferdinand’s pocket. Improved in the second half though. 6
Iniesta Gave possession to United in a dangerous area, but apart from that he had a good night, more so when he switched over from left to right. 7
Subs:
Bojan Looked a little out of his depth. His time will come. 5
Henry Tested Van der Sar with a fierce shot, and went quite close with a free-kick. Looked hungry to remind English fans of his qualities. 6
MAN UTD
Van der Sar Apart from a few dodgy clearing kicks, he did well and made a couple of good saves in the second half. 6
Hargreaves Mr Versatile is a perfectly decent right-back. Had a fairly quiet game. 6
Ferdinand Majestic for most of the game. Hardly gave Samuel Eto’o a sniff. Is there a better centre-half in the world right now? I don’t think so. 9 MAN OF THE MATCH
Brown Clearly the junior partner alongside Rio but defended pretty well. Uncomfortable with the ball at his feet, as ever. 6
Evra Fast, athletic, diligent. Another strong performance from the Premier League’s best left-back. 7
Carrick A typically subtle, clever showing. Had a half chance to score when he forced his way into the box, but found the side netting. Brilliant defensive tackle denied Barca an almost certain goal. 7
Scholes Alex Ferguson rated Scholes as his best player on the night. Strange, because I could have sworn he had a poor game. Didn’t get involved, chasing shadows for long periods, especially in the second half. 5
Park More perspiration than inspiration. A conservative selection. 5
TÃ©vez A square peg in a round hole. Had no joy playing so deep. Should have been deployed further up the pitch. 5
Ronaldo Won a free-kick, corner and penalty in the first two minutes, and could have had another penalty in the first half. Point docked for the penalty miss, but he was still United’s biggest offensive threat. 6
Rooney Played out on the right but had no impact against Abidal. Replaced by Nani. 5
Subs:
Nani & Giggs Not enough time to change the course of the match. 5