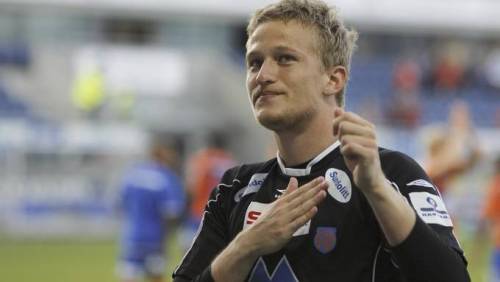 Manchester United are locked in talks with Norwegian club Aalesund over bringing their goalkeeper Anders Lindegaard to Old Trafford in January.

It was thought that representatives of both clubs met in Manchester and agreed on a fee of £3.5 million yesterday, and that the ongoing negotiations were over Lindegaard’s personal terms – although Aalesund’s sporting director Henrik Hoff insists he will be returning home to Norway with no firm offer on the table:

“Nothing is signed and we are flying home. [Hoff leaving Manchester] means that we are still in negotiations, I can’t say more than that.”

However, Aalesund remain seemingly confident that the deal is close to completion after mistakenly posting premature confirmation of the transfer on their official website yesterday evening, with spaces left in which to enter the relevant length of the contract:

“AaFK and Manchester United have agreed on a transfer of Anders Lindegaard. The deal was just signed and a dream has come true for the Danish goalkeeper. He will be representing the Red Devils from ___ and the contract lasts until ___.

“We wish Anders all the best in Manchester and wish to thank him for his great efforts.”

The article was then removed within minutes of being posted. Oops-a-daisy!

According to a few sources, Lindegaard himself travelled to United’s Carrington training complex earlier today for a tour of the facilities and to undergo a medical – though nothing has been confirmed by the club.