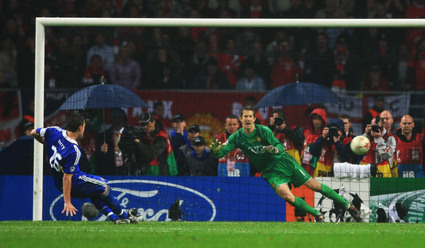 MANCHESTER UNITED
Edwin Van der Sar The hero of the penalty shootout as he saved from Nicolas Anelka. A couple of important saves in the match too. 8
Wes Brown Quietly effective for the most part. Kept Malouda quiet, although the French winger was doing a pretty decent job by himself. 7
Rio Ferdinand Made some crucial interventions especially in the first-half, but got a little reckless as cramp and fatigue set in. 7

Nemanja Vidic A one-man ball repelling machine. Strong as a bull and probably the best defender in the world on current form. 9
Patrice Evra More useful going forward than defensively on the night. Linked up well with C-Ron and created chances. Lucky to get away with a petulant swipe at Joe Cole. 7
Owen Hargreaves Like a lot of his team-mates he was decent in the first-half but failed to impose himself after the break. Lost a bit of composure after taking a clout from Makelele. 6
Paul Scholes Passed well in the first-half but also managed to injury his face with a trademark mistimed challenge. Ironic. 7
Michael Carrick Never did too much wrong, but never took the game by the scruff of the neck either. 6
Cristiano Ronaldo Outstanding in the first-half but thought he had done his work. His stuttering penalty nearly cost United. 8
Wayne Rooney Played some spectacular long-range balls but never threatened in the danger zone. 7
Carlos Tevez Worked hard but had little to show for his efforts other than contributing to Drogba’s red card. 7
Subs:
Ryan Giggs Missed the best chance of the game. 5
Nani Never got into the game. 5
Anderson Came on for penalties. N/A
CHELSEA
Petr Cech Had little to do especially in the second half. So nearly the penalty shootout hero. 8
Michael Essien Overran by Ronaldo in the first-half, but found that attack was the best form of defence after the break with some success. 7
Ricardo Carvalho Lost concentration too often. 6
John Terry Great captain’s display, including a saving header to keep Chelsea in the match. Unfortunate to slip on his penalty. 8
Ashley Cole Can take heart from the fact that C-Ron is scared to face him(!) but did little during the match. 6
Joe Cole Who? Was he playing? Are you sure? Better give him a five then. 5
Frank Lampard A heroic performance. Scored the goal, nearly got another and put his difficult circumstances behind him to put in a good display. 8
Claude Makelele No nonsense as usual. 7
Michael Ballack Worked hard and played really well. One of his best ‘big’ games for Chelsea. 8
Florent Malouda Played about as well as he has all season, which is not a compliment. 5
Didier Drogba Anonymous until he managed to get himself sent-off (other than his snapshot which hit the outside of the post) 5
Subs:
Salomon Kalou About as effective as Malouda. 5
Nicolas Anelka A couple of decent runs, but missed the decisive penalty. 6
Juliano Belletti Came on for penalties. N/A