Fergie makes Â£6m on Spanish defender – but should he have kept him? 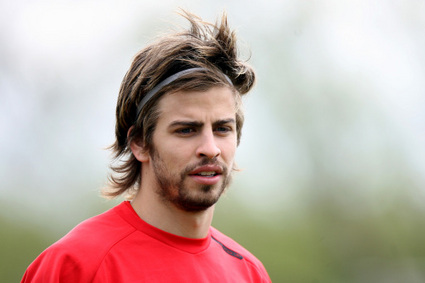 Barcelona have just re-signed Gerard Pique from Man Utd, for a fee reported to be around Â£6m. Pique is only 21 and he failed to break into United’s first team – not a great surprise, given the stellar form of Rio Ferdinand and Nemanja Vidic.
On those terms, Â£6m is a fine return on a player they bought from Barca in the first place, and for virtually nothing. But is it a mistake to sell a young, improving squad member? Pique would have offered solid cover for Ferdinand/Vidic next season, in a position where United lack strength in depth. Of course, Fergie may have a central defender lined up in his summer hit-list, in which case the sale of Pique would be less of a blow.

The question is, how much potential does Pique have? From what I’ve seen, he is a very talented, composed, confident young footballer. He lacks pace – and he’s not going to get any faster – but his positional sense is pretty good, considering that he’s playing in a position where players tend to mature older. He’s good on the ball, and at 6ft 4in he’s physically blessed. It will be interesting to see how much first-team action he sees at Barca, who could use another decent centre-back.
What do you think – did Fergie & Carlos Queiroz drop the ball with Pique?