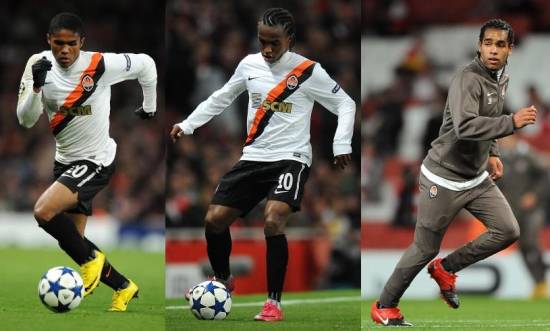 Rumours abound this morning that Manchester United are preparing a combined £35 million package deal with which they hope to cajole Shakhtar Donetsk into parting with three of their (many) highly-rated Brazilian tyros – namely Messrs. Douglas Costa, Willian and Alex Teixeira.

Apparently Fergie has been sweet on 20-year-old Costa for a while now, passing up the chance to sign him six months before he left Gremio for Shakhtar last January, as the initial fee was deemed to high for a player yet to prove himself in European football – although it seems that an impressive 12-month stint in Ukraine may have tempered the United manager’s stance somewhat.

United were also close to snapping up Teixeira after the 20-year-old – then of Vasco Da Gama – impressed during the U20 World Championships in Egypt last year, only to see Shakhtar beat them to the punch a few months later.

22-year-old winger Willian is the longest-serving of the trio, having spent the last four(ish) years at WAXTAP since joining from Corinthians for $19 million back in August of 2007.