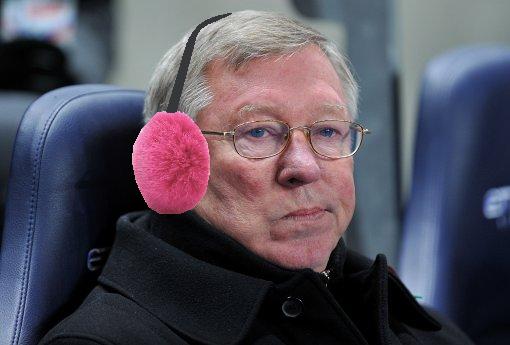 Sir Alex: Not a snood fan, though cheeky red beanies are passable

We never shirk the big issues here on Pies, and this is one of the biggest issues to have not been shirked – so to speak.

Word is reaching us that Manchester United players have been banned from wearing snoods, with The Sun claiming that manager Sir Alex Ferguson supposedly yelled during training:

“They’re for powder puffs. Real men don’t wear things like that. Get ’em off.”

“You won’t see a Man Utd player wearing a snood.”

As the harrowing news broke across the length and breadth of the land, erstwhile reporters took the only logical step when faced with such inhumane deprivation and canvassed former Leeds nutball and archetypal ‘hardman’ Norman ‘Bite Your Legs’ Hunter for his opinion:

“Fergie’s of the old guard that wouldn’t want players running out in that. They just look uncomfortable. If anybody grabbed you from behind, they could almost throttle you.

“We didn’t even wear gloves. We played in a lot worse conditions than they play in now – ice, snow, mud, everything. Nowadays players go out with body and leg warmers and this thing on their neck. We used to rub Algipan oil all over. That kept us warm.”

And, I ask you, what could be more manly than rubbing syrupy oil over one another’s supple young bodies in order to keep warm?