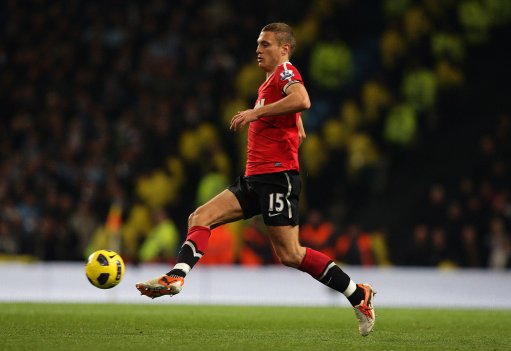 According to the erstwhile fountain of spurious cockamamie that is Goal.com (I know, I’m sorry), Manchester City are ready to renew their attempts to lure Nemanja Vidic across the city by offering the elbow-nosed Serbian centre-back a rather large ‘double-your-money’ deal in the summer.

The report suggests that 29-year-old Vidic is unhappy with his £90,000 weekly lot at United and feels he should be in the same pay bracket as his defensive partner Rio Ferdinand – who currently rakes in £120,000 every seven days – and that he may be attracted by the possibility of one final monster pay-day at Eastlands.

There are even ominous quotes from a conveniently placed ‘Manchester source’:

“City were prepared to double Vidic’s wages last summer and they are still are.

“They have signed a lot of defenders since Sheikh Mansour bought the club but they do not have a world-class player who they can build the defence around for the next few years.

“Vidic fits the bill perfectly as a proven and durable Premier League centre-back.”

Make of that what thou wilst, but may I recommend that such high-grade horse-sh*t would probably make excellent compost?