Throughout the day, Pies will look closely at the respective teams of United and Barca. We begin at the beginning, with the No.1s 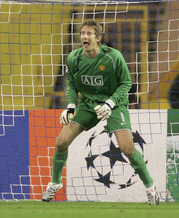 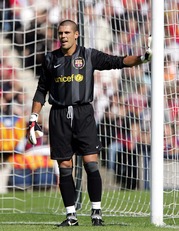 Edwin van der Sar (Man Utd)
The Dutch veteran has enjoyed a vintage season, breaking Petr Cech’s Prem record for minutes played without conceding a goal. He’ll be 40 next year though, so this will probably be his final campaign as United’s first-choice ‘keeper – and what better way to go out than by keeping Messi, Henry and Eto’o at bay.
Van der Sar’s chief asset is his massive experience (he rarely loses his cool, which is exactly what a defender wants from his goalie), not to mention his massiveness. At almost 6ft6in tall, VDS is one imposing streak of piss – he dominates his area brilliantly, often acting as a sweeper. If he has a weakness, it’s the variable quality of his clearances. I remember last season’s CL semi final against Barcelona, when Alex Ferguson was literally screaming at his players NOT to pass back to him. If Barca’s front three really press Van der Sar, they could force an error. But overall, he’s a very safe pair of hands.
Mark: 8/10

Victor Valdes (Barcelona)
Every great team needs a great keeper, and Valdes is obviously not a great keeper. But he is not as bad as many people make out; he has been Barcelona’s first-choice goalie for five years, and you don’t hold that position unless you’re half-decent.
Like Van der Sar, Valdes had a fine season, conceding less than a goal per game in La Liga. And like VDS, the older he gets (he’s 27 now), the better he gets. He still has the occasional rush of blood to the head, but his excellent save from Chelsea’s Didier Drogba in the CL semi final leg at the Camp Nou is a better reflection of his current form -Â his agility and reflexes are absolutely first-class. Valdes won’t let Barcelona down.
Mark: 7/10
Verdict: Both Van der Sar and Valdes are excellent keepers, but I’d take VDS, for his experience and cool head.
Which player would you rather have in your team? Vote now: