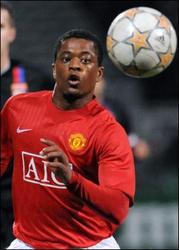 Patrice Evra (Man Utd)
Evra is the best left-back in the Premier League, and one of the best in the world. Most importantly, he has recovery pace to burn, so when he does make mistakes he almost always gets away with them. Comfortable on the ball, and never afraid to cross the halfway line, Evra will be instructed to get forward as often as possible, in support of Wayne Rooney. That way, United can keep Lionel Messi on the back foot.
In terms of mental strength, Evra is also first-class. He’s clearly a hugely self-confident man, so there’s no danger he’ll freeze on the big stage. An early yellow card, received after some moment of Messi magic, is a possibility though – that would greatly reduce his effectiveness.
Mark: 8/10

Sylvinho (Barcelona)
With Eric Abidal out through suspension, the 35-year-old Brazilian, who played for Arsenal at the turn of the century, is tipped to start at LB tonight. Sylvinho’s experience is his biggest asset, and though he’s never been a first-team regular at the Camp Nou, he is well thought of by the club.
That said, Sylvinho will be viewed by Man Yoo as a weak point in Barca’s back four, no doubt. With the energetic Park Ji-Sung likely to be his direct opponent tonight, I doubt Sylvinho will last for 90 minutes, especially if United take the lead. And at some stage, Ronaldo will test the Brazilian’s ageing legs to breaking point; it’s a great- match-up for United.
Mark: 6/10
Verdict: Only one winner here, and it’s not the Gooner reject.