Hmm, I can guess which way this will go… 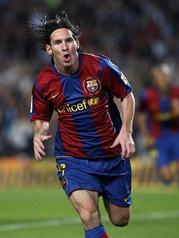 Park Ji-Sung (Man Utd)
Left out of the squad for last year’s final, but Fergie has promised him a role in Rome. He’ll probably start, and on the right (then why do I get the nagging feeling that Fergie will thrown a curveball and start instead with Tevez or Berbatov?), in the role that he has made his own in the Champions League this season: it’s a sweat-stained role typified by selflessness and enthusiasm, and Park excels at it. It helps that he appears to have no ego.
If Park does play, he’ll become the first Asian to appear in a Champions League final.
Mark: 7/10

Lionel Messi (Barcelona)
The best player in the world, or merely the second-best player in the world? Either way, it doesn’t really matter: whatever the media says, Fergie knows that Messi is extremely dangerous and must be watched at all times.
Not that Messi is invincible. The little Argentine was kept quiet in both legs against Chelsea in the semis, and he has yet to score in Europe against an English club. He’ll have to find a way past Wayne Rooney AND Patrice Evra too, which is no easy task. If he gets no joy against the Rooney/Evra double act, don’t be suprised to see him switched to the left flank, to have a run at John O’Shea.
Mark: 9/10
Verdict: Park is the perfect team player, but people forget that Messi is also very unselfish. The Korean, who is a better footballer than he is given credit for, won’t let his team down, but Messi wins this one, by a clear margin.