Such a beautiful horizon… 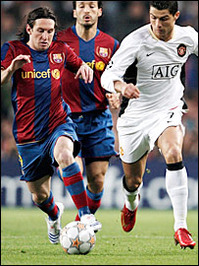 Well, we’re all tremendously excited about this, I can tell. I can’t remember this much hype before a football match since England last got knocked out of the World Cup.
I suppose the hype is warranted. Not since Milan tonked Barca 4-0 in 1994 have we been treated to a Champions League final between the two best teams on the planet. And of course there are so many sub-plots to enjoy, most notably the whole “Messi v Ronaldo” debate, which amounts to little more than “My dad’s harder than your dad”. They’re both amazing players, let’s leave it at that.

And who do you think will be voted man of the match?