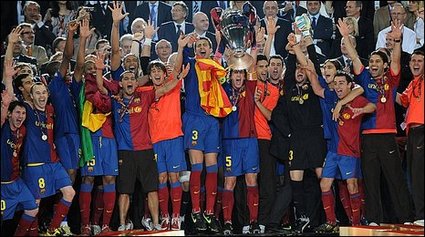 1. Dream final? Yep, it made me sleepy, so in that respect it lived up to its billing. But after so much hype, this was a big fat anti-climax – as a spectacle, I mean. Even taking into account the depth of modern squads, both clubs have played a ridiculous amount of football this season. Last night’s final was Man Utd’s 74th game of the 08/09 campaign (including pre-season friendlies), so it wasn’t a game too far; it was ten games too far, at least.

2. The opening goal killed the game. Remember how dull Man Utd’s 3-1 win against Arsenal in the second leg of the CL semi final at the Emirates was? And all because the result was decided in the first ten minutes. Much the same thing happened last night. People say United were given a football lesson, which is true, but don’t forget how dominant Ronaldo and co. were in the opening ten minutes in Rome. If United had scored early, rather than Barcelona – as seemed the most likely outcome -Â then I’m sure United would have strolled around, in command, looking like the best team on the planet. But one sharp turn by Samuel Eto’o later (Nemanja Vidic didn’t look so hot there, did he), and BANG! United were in shock for the rest of the match, and never snapped out of it -Â their body language spoke volumes: this wasn’t supposed to happen. There can be no more difficult task in football than having to chase a game against this Barcelona team – when a team is forced to open up and play football against Xavi and Iniesta, it’s never going to end well. As soon as Eto’o jabbed the ball past Edwin van der Sar’s weak hand, United’s players were immediately confronted with the inexorable truth of impending defeat. Thereafter, United hardly touched the ball. 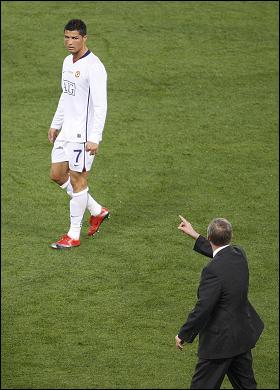 3. Only C-Ron went down with a fight. While most of United’s players appeared tired and almost willing to accept defeat, at least Ronaldo looked like a man who wasn’t going down without a scrap. Perhaps that’s because his ego is so big that he couldn’t accept the painful truth, or perhaps it’s because he’s that bit better than his team-mates. Either way, no one could accuse him of giving up. Yes, at times he was too selfish, as if he wanted to win the final on his own (see the first ten minutes), but he was also United’s best player on the night.
4. Massimo Busacca played a blinder. In fact, I hardly noticed the Swiss ref, and that’s how it should be.
5. Gerard PiquÃ© is the new Beckenbauer. OK, now that is hype worthy of any tabloid newspaper, but after writing a piece not so long ago about how PiquÃ© will become the best centre-back in the world, it gave me a warm glow (that could have been the Heineken) to see him play so well. PiquÃ©’s task last night was to anchor a makeshift defence in a European final against the reigning champions. And he did so brilliantly, though I concede United didn’t exactly menace Barca’s back four. Not that it was a surprise to see PiquÃ© shine – in the last couple of months, he’s been fantastic. And to think, Alex Ferguson says he chose Jonny Evans over PiquÃ© (in truth, I think United’s gaffer simply couldn’t stop the young Catalan from re-joining his childhood club). 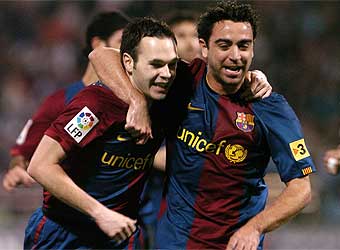 6. Xavi and Iniesta are football’s best double act since Zico and Socrates. By the power of Greyskull, those little Spaniards know how to play football. Both players were majestic last night, but especially Iniesta. They made Carrick and Giggs -Â both of whom missed the comforting presence of Darren Fletcher – look like League One players.
7. Let’s hear it for Pep Guardiola. The treble in his first season as manager? Not a problem for football’s newly crowned Special One. Do you think Peter Kenyon has been on the phone to Guardiola’s agent? It’s a wholly depressing thought, I know, but rest assured Pep is going nowhere: he is FC Barcelona.
8. Michel Platini, Silvio Berlusconi and Prince William. What a fun dinner party that would be. Did you see how damn happy Platini was that Barcelona won!? He almost jizzed in his pants.
9. Clive Tyldesley was not annoying, unlike David Pleat. ITV’s commentator did a good, measured job, I thought. For once, there was no crazy talk about “that magical night in Barcelona”, and how United were destined to score three goals in the last 90 seconds. He knew this time the game was up for United. Pleaty though… well, I enjoyed his non-stop Xavi and Iniesta wank fest, but for him to claim that no one had talked about Iniesta in the build-up to the game was laughable. His garbled pronunciation of ‘Guardiola’ was also a delight.
10. Barcelona deserved to win. In the end, that’s what matters. Football justice was done. It seems only Chelsea, that repulsive and negative team of Terminators and mercenaries, have the blueprint to keep the Catalan genies in the bottle, and in the end even their cunning plan didn’t work (no thanks to a certain Norwegian ref, of course). As James Lawton writes in today’s Independent, Barcelona are not just champions of Europe, they are champions of football. Hear hear.