Ronaldo and Tevez to strop out of Old Trafford? 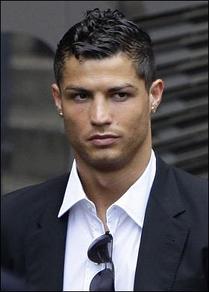 1. Cristiano Ronaldo is sulking. He slammed Alex Ferguson’s tactics for Wednesday’s Champions League final, saying: “Ferguson did not tell me anything. Nothing. I didn’t realise I was to play as a striker.” [@ The Sun]
2. …Which all means C-Ron’s definitely off to Real Madrid now. Maybe. Yawn. Ronaldo’s bad mood has, predictably, re-ignited the Spanish club’s interest in the United star. Florentino Perez, Madrid’s next President, is making come-to-Spain noises.

3. Carlos Tevez is sulking too. He has also criticised Fergie, for the decision not to pick… him! “I wanted to play in the starting line-up in Rome,” Carlitos moaned. “But that decision was down to the coach.” Yes it was. Looks like there’s a very good chance Tevez will leave United in the summer, probably for Anfield or Eastlands (both choices will sit well with United fans). Gasp!
4. Fergie is in a nasty mood (see a pattern here?)
5. The worst consequence of United’s defeat: “A Manchester United fan in Nigeria deliberately smashed the bus he was driving into a crowd celebrating Barcelona’s victory in the Champions’ League final and killed four people, police have said.
“A Rivers State police spokeswoman said the driver was in custody after making a U-turn and driving into the Barcelona supporters. More than 10 other people were injured.” Unbelievable.
6. Time is up for Man Utd’s old guard: that means the end of the line for Edwin van der Sar, Gary Neville, Paul Scholes and even Ryan Giggs. I can’t see Neville’s United playing career starting up again, while Scholes is reportedly interested in a coaching role at Stoke City. According to the Guardian, “It is understood the Stoke manager, Tony Pulis, has offered Scholes the chance to combine a coaching role with a playing contract at the club next season.”