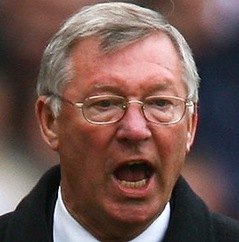 Time was, the only way you’d leave Old Trafford was on the say-so of Ferguson. A United player’s future was almost entirely in Ferguson’s hands. Those days are long gone.
Player power is so great that football managers no longer inspire fear in the men they manage. Sometimes they don’t even inspire basic respect (see Didier Drogba’s refusal to play for Big Phil Scolari).

Even Fergie appears to be losing his edge. Could he stop Cristiano Ronaldo leaving Old Trafford? No, he couldn’t. C-Ron has no fear of Fergie’s hairdryer; it’s an outdated tool, ineffective on the very best players, who want for nothing and only listen to their agents (I’m sure Ferguson knows this too).
And when Ferguson himself phoned up Carlos Tevez to try and persuade him to stay at United, Tevez did not cower and say “Yes, gaffer, whatever you say.” Instead, the Argentine bristled and made up his mind to leave (so it seems).
It takes a very special, very charismatic man to successfully manage today’s vainglorious brand of football star -Â young, thrusting chaps like Pep Guardiola and Jose Mourinho, for example. Men with stubble.
The rise in dugout tantrums is no anomaly or coincidence. It’s the direct consequence of the disproportionate amount of power players now have. If they think they are above their managers, as so many do, then something is very wrong with the game.
Football needs to take its cue from the major American sports. In baseball, basketball and American football, head coaches are (generally) respected 100% and treated accordingly by their playing staff. The head coach is God, a father figure and a boss rolled into one. It used to be the same in football (see Alf Ramsay, Bill Shankly, Matt Busby, Brian Clough etc.), but the tidal wave of money that has flooded the sport has reshaped the role of a manager, for the worse.
All of which has left Fergie looking rather like an old wizard who has lost his magic staff. And if Fergie can’t get a little respect, what hope is there for men like Gary Megson?