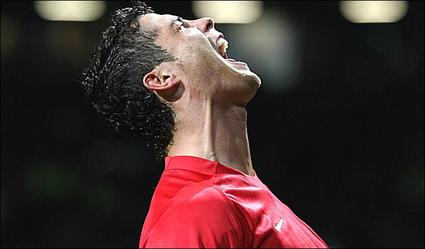 Don’t make me angry. You won’t like me when I’m angry
From today’s Current Bun:
“A girl suffered cuts on her arms when soccer ace Cristiano Ronaldo kicked in a car window, it emerged last night. The Portuguese star faces a police quiz over the injuries to Sara Pardal, 17.
“Ronaldo, 24, allegedly flipped in his Ferrari in Lisbon when he spotted he was being filmed from another car. The ex-Manchester United winger is said to have stopped and leapt out of the vehicle before booting a side window of the car. It shattered, sending broken glass flying over the teenager.”

C-Ron was on his way to an Elton John gig last weekend with his mother, Dolores, and two sisters when the incident supposedly happened. Pardal was in the car with a man who Ronaldo’s people claimed was a paparazzo. Ron is very, VERY protective of his mum and used this as an excuse for falling into a fiendish “paparazzi trap”.
“He [the photographer] chased me by car from the Ritz Hotel with my mother in the car with me and they filmed all our actions. The chase so perturbed my mother that I had to stop and convince them to leave us,” Ronaldo said on the website of Gestifute, his management agency.
I think C-Ron threw the (alleged) tantrum because he wanted to see George Michael instead: