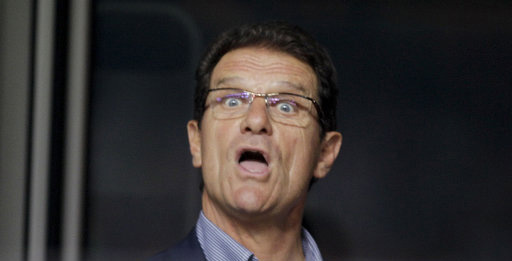 It seems that Fabio Capello hasn’t toally fallen out of love with England despite his rather messy resignation earlier this year. The 65-year-old has a superb CV, following trophy-laden spells with AC Milan, Roma, Juventus and Real Madrid, but despite receiving a load of offers from Europe, the Italian tactician is now on the look-out for management job in the Premier League. Obviously the great weather, respectful press and fine English cuisine have proved too much of a draw.

Speaking to the Times, the former Milan, Juventus and Real Madrid coach said:

“England would be very interesting for me because I know very well the teams and the players. I want to manage a team that wants to win something, if possible.”

“It has to be interesting based on the value of the team, not money. I don’t work for money. I want to manage a team that is able to play in the Champions League and to fight for lots of trophies.”

So there you have it. We know what he wants, but the question is – do any of the big clubs in the Premier League want him? Chelsea maybe? Or what about Liverpool if they have a bad start to next season?