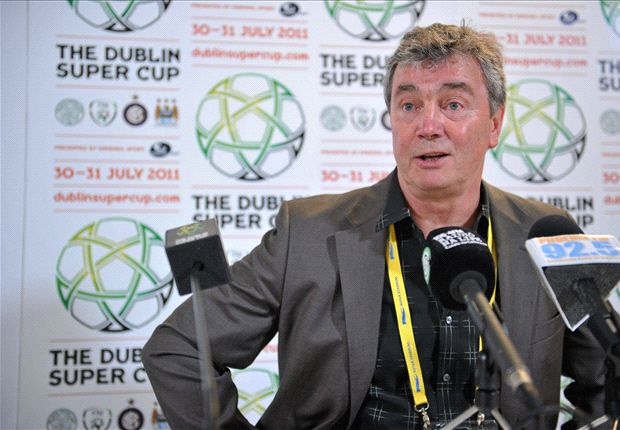 A man known for his rather flamboyant  use of the English language, Drogheda United’s new boss Damien Richardson has once again staked his claim to be considered at the same literary level as fellow countrymen James Joyce, Flann O’Brien and Oscar Wilde.

Returning to management after a break of seven or so years, Richardson celebrated his appointment at Drogheda with a tour-de-force.

Writing in the Drog’s matchday programme for the clash against UCD, the former Gillingham player and manager produced an exquisite literary ramble.

Life was calm. Life was flowing with such an elegant composure, that I began to wonder on a daily basis why I had waited so long to meander peacefully along the precocious path of semi-retirement. I had time for everything and everybody. A new man in a new world. Blissful and unconcerned.

Then the phone rang. I was offered a job, in Drogheda, and amazing myself, I proposed time for consideration. Sitting contemplatively under the bowing branches of my heavily-laden pear tree my mind wandered whimsically. My life was indeed calm, unruffled and serene, but, almost surreptitiously, my mental meandering was slowly dislodging the wrappings of contentment and revealing to a relatively receptive inner self the slightest glimpse of a restlessness that I must confess, has always been an integral aspect of who I am.

But this spirit of restlessness which invariably manifests itself as a confounded and all too often insatiable desire to discover what is around that next corner, has very rarely let me down. So, as ever, I am following my instinct, and here I am.

Consequently, the bliss has been bombed, the peace has been parked, and while the elegant composure is still in place, I cannot offer any guarantees on its longevity.

Is it good to be back? Well, let me put it to you this way, if, like me, you were on the verge of middle age and you were asked to work with a large group of talented young people, at a wonderful club in a football mad town could you turn it down? Of course, it’s a rhetorical question, or to be more precise two rhetorical questions.

The strong relationship between the players and supporters of Drogheda United is also a key component in my decision to return to football. Without wishing to be sycophantic in any way, it is no coincidence that all the best clubs have the best supporters and in this sense this club belongs at the top table. But of course at the moment it is not in residence at the top table so it is essential that we all work together to ensure that the unacceptable situation that abounds at this time is rectified.

It would be remiss of me not to mention the good work being done in recent weeks by Darius Kierans, Neale Fenn and Dermot O’Neill. They have induced stability after a turbulent period and granted me a positive base to work from and they deserve recognition for this. It was an absolute no brainer to retain their services and hopefully they will be of even greater service to the club for some time to come.

The players too deserve enormous credit for the manner in which they have responded to the challenge and the fine win in Tallaght last Friday effectively demonstrated the true personality of the squad.

I am delighted to be here, and I am even more delighted that you are here. I intend to make my presence felt. Are you ready to do the same?