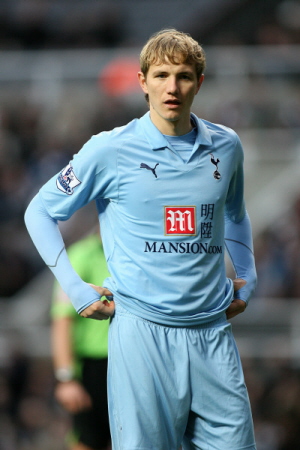 Knowing he wasn’t likely to play, Roman took to turning up in his pyjamas

In even more Spurs news, The Mirror reports that Tottenham outcast Roman Pavlyuchenko is on the brink of securing his long-awaited move away from White Hart Lane, with Zenit St. Petersburg having made a £10.2 million bid for the striker.

Pavlyuchenko has been attracting a lot of interest during the transfer window, with Arsenal, Liverpool, Birmingham, Stoke and Roma all being linked with the forward but no firm offers had been received for him until Zenit formally stumped up the cash earlier today.

With his place in Russia’s international squad in jeopardy Pavlyuchenko is desperate to play first team football as the form of Jermaine Defoe, Peter Crouch and, more sporadically, Robbie Keane has seen the Russian target man fall down the pecking order at White Hart Lane. His appearances have generally been restricted to outings in the Carling Cup but the striker has still managed a fairly respectable 15 goals in 43 appearances for Spurs which shows that he would be capable of scoring regularly if given a run in the starting eleven.

Tottenham chairman Daniel Levy is apparently trying to hold out and recoup even more of the £13.8 million he payed Spartak Moscow for Pavlyuchenko two years ago but surely ‘striking whilst the iron is hot’ may be the best policy and a £10 million fee may represent the best offer Spurs will receive for the want-away player.