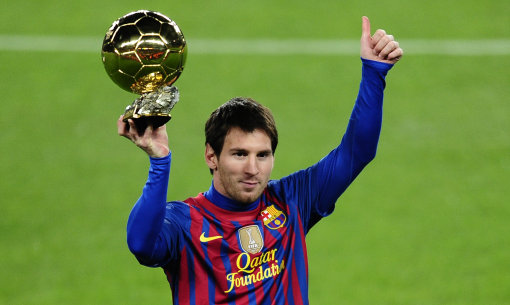 FIFA have taken it upon themselves to announce their 23-man long shortlist/short longlist of nominations for this year’s Ballon d’Or prize.

The long/shortlist will be further whittled down to just three names (the short shortlist) at the tail end of November, with the winner being announced at FIFA’s annual jolly in Zurich on January 7th of next year.

Few iffy names up there. Balotelli’s been much of a muchness and is probably included solely for his goal/celebration against Germany at Euro 2012.

As for Pique, really? We’re struggling to think of one good reason why the Shakira-inseminator warrants a place on the list seeing as he’s played about half-an-hour’s football for Barca this year – unless successfully inseminating Shakira actually counts of course.

Not that it matters any road up, because we’re basically looking at a two-way coin flip between Lionel Messi and Cristiano Ronaldo again. Anyone out there think otherwise?

Who would you’re outside bet for the 2012 Ballon d’Or be? We’re tempted by a flutter on Falcao, but we’ll wait until the end of November before we slap our balls on the table.