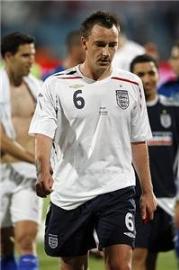 England captain John Terry ripped a shirt out of the hands of his Andorra counterpart following Wednesday night’s Euro 2008 qualifier. Terry waded in to retrieve Jermain Defoe’s shirt from Oscar Sonjee. The Chelsea man was unhappy at Andorra’s intimidation tactics and attempted to stop the England players swapping shirts in the tunnel.
Sonjee moaned: “It was a really ugly moment. I had Defoeâ€™s shirt in my hand to swap for mine. But Terry rammed into me with a really hard shove and snatched it. I was stunned. It was humiliating. No team has ever refused to honour the custom of exchanging shirts with us before.” [Via The Sun, Rob Parker]