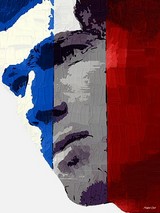 Enzo Zidane – isn’t that the coolest damn name you ever heard? He sounds like a superbad Bond villain or a racing driver from the Fifites. As it happens, he’s neither – but he is the son of a certain Zinedine Zidane, which surely comes third on the list of coolness.
Enzo, named after Uruguay football legend Enzo Francescoli (I remember having a World Cup 86 Panini sticker of him on our fridge at home when I was a teenager), is 12 years old and starting out on his football career â€“ the signs are already there that he has what it takes to follow in his dad’s footsteps. No, he didn’t butt an opponent, but he did help one of Real Madrid’s youth teams win a trophy last weekend, against rivals Barcelona no less. Master Zidane plays in midfield, like his pop, and according to match reports, he can even do the famous Zidane 360. It’ll be fascinating to see how Enzo’s career develops. Jordi Cruyff, anyone?
[Via Reuters Soccer Blog]