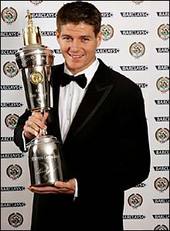 ‘Giggs and Scholes seem like sentimental picks to me. Remove Ronaldo from the ManU lineup and you notice the hole.’ [The Footie Fool]
‘Players like Gareth Barry and Nemanja Vidic deserve recognition but theyâ€™ll never get it because theyâ€™ll never be the best players in the league and they arenâ€™t young, yet have outperformed Micah Richards, Wayne Rooney and Aaron Lennon all season long.’ [Inside Arsenal]
‘The fact that all six shortlisted players come from the â€œBig Clubsâ€ will also be disconcerting to some, but then completely unsurprising to others. The shortlisted is voted by players and – despite the odd special performance from individuals at other clubs – itâ€™s likely that the toughest opponents they face will be the Big Clubs and the players who represent them.’ [Caught Offside]
‘The way I see it, and my eyes are similar to just about anyone else handicapping the award race, there are two horses in this field: Didier Drogba and Cristiano Ronaldo.’ [The Offside]