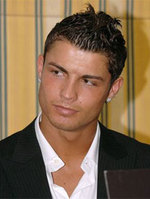 1 Cristiano Ronaldo (Man Utd)
He’s so vain, I bet he thinks this post is about himâ€¦ yep, Master Ronaldo is the winner by some distance. Everything he does screams ‘Everyone look at me!’ When Patrice Evra revealed that Ron’s nickname at Man U is ‘Playboy’ and that the Portuguese poser has his own personal mirror in the Old Trafford dressing room, was anyone really surprised?

2/3 Anton & Rio Ferdinand (West Ham & Man Utd)
Ah, the charming Ferdinand bros. They clearly take too much time over their hair, they dress in designer clobber all the time â€“ you just know they’re both vain as hell.

4 Didier Drogba (Chelsea)
Just for the way he girlishly brushes his hair behind his ears all the time. He loves himself, doesn’t he?

6 Paulo Ferreira (Chelsea)
Can’t stop playing with his hair, even when he’s playing. Way too dark and handsome for his own good. That must be why Jose Mourinho signed him – not for his playing ability, surely?

7 David James (Portsmouth)
Changes his hairstyle about 20 times a season. Has modelled for Armani. Case closed.

8 Frank Lampard (Chelsea)
Anyone who kisses their ring so conspicuously after scoring, and who demands the ball at every set piece, has to be 100% vain.

9 El-Hadji Diouf (Bolton)
Come on, just look at him.

10 Freddie Ljunberg (Arsenal)
Spends far too much time in his pants, pouting. Does he even play football these days?