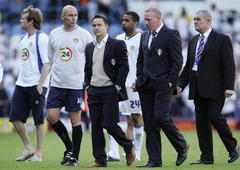 Come on, admit it â€“ you wanted Leeds to go down all along, and the fact that Dennis Wise is involved is a heart-warming bonus. Because who really loves Leeds United outside of Leeds? They have some of the most horrible fans in England (a minority, admittedly) and forever hark back to the hateful Revie era, when they had one of the most horrible teams in England. And who really loves Dennis Wise? His mum and a few old-school Chelsea fans, that’s who. Neither will be missed from the top two divisions of English football. Because football has karma too. And I haven’t even mentioned Ken Batesâ€¦ [Photo: Getty Images]