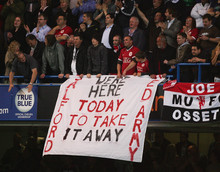 Well that was fun. What had been built up as a potential Premiership decider (Super Wednesday! Sky would have screamed) ended up as the dampest squib of the season. The sight of Chelsea’s players dutifully forming a guard of honour for the likes of Kieran Richardson, Dong Fanzhuo and Chris Eagles was faintly ridiculous, and the 90 minutes that followed was zzzzz-worthy. I got so bored I changed channels to watch Ugly Betty – and I’m not even metrosexual.
What a pisser that a match I’d been looking forward to for ages was reduced to a no-show. No ‘It’s up for grabs nowâ€¦’ this season.
[Photo: Getty Images]