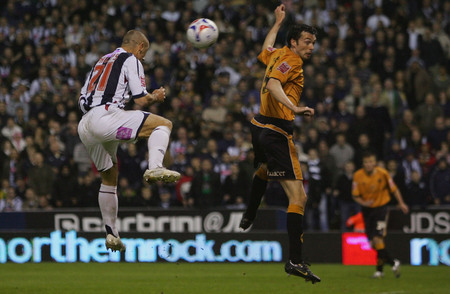 West Bromwich Albion are just one game away from the Premiership after a relatively comfortable win in the second leg of their semi-final play-off against bitter rivals Wolves at the Hawthorns. West Brom did all the hard work in the first leg, winning 3-2 at Molineux, and they never really looked like letting Wolves back in the tie.
Kevin Phillips scored the only goal of a lively game, with a header from close range in the 64th minute. From then on, the result was never in doubt. West Brom have some very good players â€“ Jason Koumas in particular is too good for the Championship â€“ and I fancy them to beat Derby in the play-off final. For Wolves it’s a case of ‘there’s always next season’ â€“ they were not as good as West Brom. [Photo: Getty Images]
Click below to watch Phillips’ winning goalâ€¦