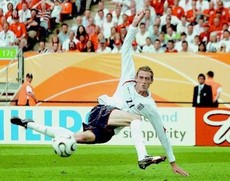 We think it’s as simple as this: if England don’t beat Estonia tonight, they won’t qualify for Euro 2008. England should beat Estonia of course, but of course we’re looking at another Andorra style of match, where the underdogs have no intention of scoring a goal. A 0-0 draw would be a triumph for Estonia, but a disaster for England and Steve McClaren.
Anyway, here’s a couple of bets which could pay off:

Correct score: England to win 1-0 (5-1)
Short odds for a correct scoreline but an unconvincing, scraped 1-0 win seems by far the most likely result in the circumstances. Croatia beat Estonia 1-0 away at the weekend, but they struggled to create chances. England won’t create many chances either, but they are looking a more confident unit with Beckham and Owen back in the fold. If you’re convinced Estonia won’s score, then a saver on a 2-0 England win (even shorter at 4-1) may appeal.

Half-time/full-time: Draw/England (11-4)
A tight first-half could see England going into the tunnel with a 0-0 scoreline and a few boos from impatient England fans. But they have too much quality for Estonia and should seal the win in the second half.
Frank Lampard to score the first goal (8-1)
Lampard is a strong character – if a little oversensitive â€“ and he will be fired up to prove his many critics wrong. Don’t be surprised if he puts in a good performance and finds the net.
[All odds Paddy Power]