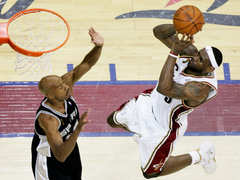 The Beautiful Game recently put up one of the most interesting posts I’ve read in ages, namely The Best Non-Soccer XI. In other words, if you could assemble a dream soccer team consisting entirely of non-soccer players (by the way, since this is about an American blog, I’ll grit my teeth and call football ‘soccer’ for the duration of this blog), who would be in it? Roger Federer in midfield? NBA star Lebron James up front? As The Beautiful Game says of James, ‘Imagine a forward taller than Peter Crouch, that will win every service in the air, that has the athleticism to ran [sic] past people and the strength to hold the ball up front.’
Ah, but could James do the robot dance?
It’s for cracking posts like this that Pies nominates The Beautiful Game as its Blog of the Week. Sweet.