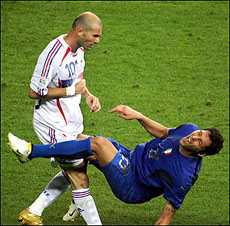 It was the head butt that ruined Franceâ€™s hopes of reclaiming the World Cup and ended a legend’s career on a sour note â€“ while the Italian antagonist, Marco Materazzi, instantly became footballâ€™s public enemy No. 1.
Well, thatâ€™s how we remember it but it seems French coach, Raymond Domenech, had a different view. â€œIn a World Cup final you score a goal, you get the opposing best player sent off and then you score your penalty (in the shootout). Say what you want about Pirlo, but Materazzi was the man of the match,” he said.
Good to see he isnâ€™t holding a grudge â€“ at least not with anyone other than Zizou perhaps. Now that the dust has settled, where would you point your finger of blame?