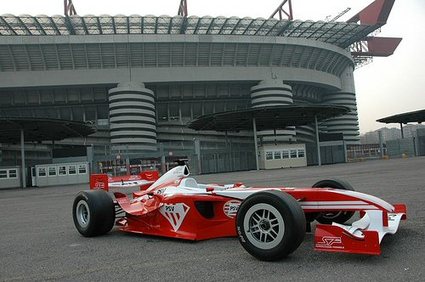 Reigning Dutch champions PSV Eindhoven have unveiled their new star performer. He has certainly got a lot of pace, has a great engine, plus he can keep running for 90 minutes and still have plenty left in the tank. Unfortunately, for PSV’s football fans it is a car.
PSV are among a number of clubs to join the Superleague Formula, which sees football club brands transported to the racetrack. PSV Eindhoven General Manager Jan Reker said: “Since we announced our participation in Superleague Formula, we have received a lot of positive response from our fans. Everybody wants to know who is going to run our team and who will drive the car.”

The Dutch Eredivisie kicks off this weekend following the traditional summer exodus. Wesley Sneijder (Real Madrid), Ryan Babel (Liverpool), Royston Drenthe (Real Madrid), Romeo Castelen (Hamburg) and Maceo Rigters (Blackburn) are among those to leave the league.
As well as receiving Â£18.3 million, Ajax also picked up an apology as part of Sneijder’s switch to the Bernabeu. The Spanish giants were forced to say sorry in order to get the transfer back on track following their aggressive pursuit of the midfielder.
The Ajax hierarchy called Real’s bluff over a take-it-or-leave-it offer below the asking price. Ajax managing director Maarten Fontein said: “It was intolerable. When we said we wouldn’t talk unless it was carried out in an polite manner they got up and left.” The deal was eventually sweetened up by a written apology from Real for the conduct during negotiations.