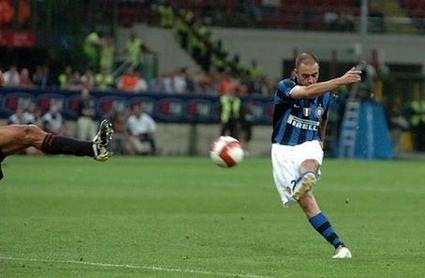 It is becoming an annual tradition for Italian clubs to be thrown out of Europe at this time of the season (and then let in again in some instances). This season it is Lazio who many people want to be banned from the Uefa Cup after crowd violence and racist chanting overshadowed their 1-1 draw with Dinamo Bucharest on Tuesday night. Five Romanians were injured in clashes at the match and one remains in hospital after being stabbed in the side.

Trofeo Tim might sound like the geekiest pre-season tournament ever, but it is usually a fairly competitive tournament. With both Milan sides and Juventus competing in the three-way trophy it is not difficult to see why the stakes are higher than in some Mickey Mouse tournaments. Inter Milan eventually triumphed in the 45-minute game tournament. Here is a needlessly over-dramatic tribute to Alvaro Recoba’s winner against AC Milan in the final.

Gazzetta leaves you with the news that Fiorentina are taking unusual measures to keep their Romanian striker Adrian Mutu off the coke: