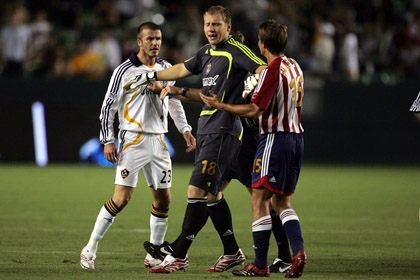 David Beckham continued clocking up air miles by arriving in LA-LA land yesterday afternoon, after playing 90 minutes at Wembley, and then being named in the starting line-up half an hour before his teamâ€™s match against Chivas USA.
He couldnâ€™t do anything to prevent a 3-0 defeat against the Galaxyâ€™s local rivals with a subdued performance that produced only two shots â€“ both off target. And, it all seemed too much when he was involved in an ugly set to in the 48th minuteâ€¦ooh, someoneâ€™s tired!
Even his optimistic US employers are now starting to concede that Beckhamâ€™s double life is showing signs of strain. “I’m not going to deny there comes a point when your body can’t do it any more,” Alexi Lalas told BBC Sport.