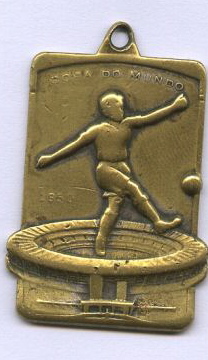 The 1950 World Cup in Brazil was when a cheeky li’l nipper named Edson Arantes do Nascimento (AKA Pele) clutched onto a radio and decided he wanted to become a football God. The goal machine who now helps out men who can’t get erections, was only nine, knee high to a goose, but deeply moved by Uruguay’s shock defeat of Brazil in the final. So after the final whistle went, legend has it he went out and built a ball out of socks, and started training day in day out so he could win the trophy back for Brazil. Eight years later he did just that.
Now, one of the Uruguayans who broke Pele’s heart in 1950 is flogging his World Cup winners medal on eBay. We reckon it’s probably one of their grandkids as most of the players are dead. But whoever’s medal it is, bidding is currently at a ridiculously low Â£0. Seriously. This is a part of World Cup history! Like owning a snippet of Bobby Charlton’s comb over. We would give you the link, but frankly we’re just going to buy it ourselves and then lie to our friends that our Granddad was from Uruguay and he beat Brazil to win the World Cup once. Nobody would ever believe that crap? Oh, alright, here’s the link….