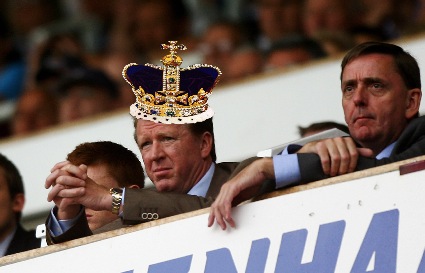 Okay, okay, we’ll be the first to admit it, we doubted Saint Steve’s capabilities at an international level. Yes, yes, we compared Lord McLaren to an artichoke (God’s worst vegetable) and laughed at his rubbish goldeny hair (well, what’s left of it). But we’ll also be first to admit that thanks to some of his wild decisions, England cruised to a much needed six points out of six. If it had gone tits up, decisions like playing Heskey would have seen him brutally destroyed faster than a kebab snuck into Fat Camp.
But were these brave decisions down to luck or bravery, here’s how Pies sees it…
Photo: Getty

1) Playing Emile
Technically when Hesk was rubbish for England, he was playing on the left wing (God, remember that?), but still Lord Mc still had other options up front.
Verdict: bravery
2) Playing Joe Cole and Shaun Wright Phillips together
Jose Mourinho thinks they can’t play together (they only have done 12 times) and he’s, lets face it, smarter than God like McLaren. There were again other options on the wings, so he deserves credit for this one.
Verdict: bravery
3) Sticking with Paul Robinson
This was a no win situation, with no real other options. People hate poor James as much as poor Robbo.
Verdict: Luck
4) Playing Gazza Barry in the middle
People have been screaming litterally screaming that you can’t play two attacking midfielders like Gerrard and Lampard together for years. Only injury to non-fat Frank made Stevie McOBE see sense.
Verdict: Luck