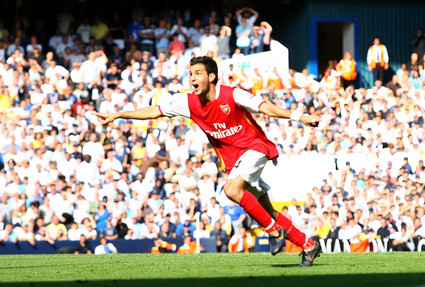 1 Cesc Fabregas (pictured after scoring against Spurs at the weekend) is so good it scares me. Two assists and one goal in the North London derby, and, as Arseblog points out, it wasn’t even his best performance of the season. Is there a more valuable player in the Premier League right now? (Answer: no, there isn’t)
2 I’m no West Ham fan, but it was great to see Dean Ashton score his first goal since the 2006 FA Cup final. Of course, the fact he’s in my fantasy football team has nothing to do with it!
3 More good news for Man City fans – this Michael Johnson fellow looks a bit tasty (click here to see his goal against Villa). And he’s still only 19. Suddenly the future of English football looks bright.

4 If Spurs lose at home to Bolton next Sunday, Martin Jol will have to find a new job. Conversely, if Spurs thump Bolton (as I suspect they might), then Sammy Lee will have to find a new job. Both managers are living on borrowed time.
5 Clint Dempsey (who is also in my fantasy football team) is settling in to English football nicely and could well be Fulham’s saviour â€“ ie. the man who helps them avoid the drop â€“ this season. Go Deuce!
6 Kenwyne Jones looks like another inspired Roy Keane signing.
7 Why would Rafa Benitez keep Gerrard and Torres on the bench – I thought the league was his priority this season? As strong as Pompey are at home, Liverpool should be taking three points from Fratton if they have genuine title pretensions.
8 Two points off the top after one of their worst starts to a season – looks like reports of a Man Utd crisis were greatly exaggerated.
9 Gareth Bale is not overrated, as even I first suspected. He is pure class and has been one of the few bright spots in Spurs’ sorry start to the campaign.
10 Brad Friedel is the best goalkeeper in the Prem, and has been for many seasons now.