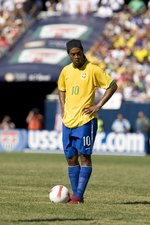 Our American buddies at The Offside filled me in on the Free Kick Masters, a special tournament featuring some of the worldâ€™s best ‘free-kickers’ competing against some of the worldâ€™s best goalkeepers in a free-kick shootout. The event takes place on 22nd December at the Reliant Stadium in Houston, Texas. It’s a bit like the NBA’s dunk contest, I guess. The line-up of talent includes Ronaldinho (pictured), Alessandro Del Piero, Luis Figo, Lionel Messi, Jay Jay Okocha and David Villa. However, David Beckham is nowhere to be seen. Nor is Lyon’s Brazilian maestro Juninho, widely considered to be one of the world’s best free-kick specialists. Bit of a sponsored circus if you ask me, aimed at making soccerball more ‘razzmatazzy’ for our American cousins. Probably be fun to watch though.