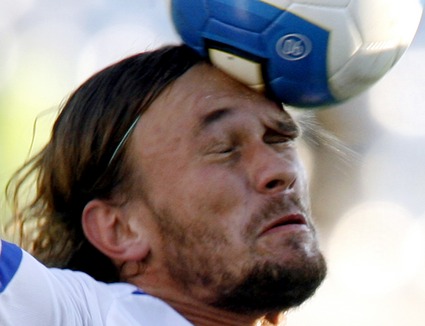 Oof! Krzysztof Lagiewka’s eyebrow just took one hell of a beating. Scientists often say that repeatedly heading the ball is bad for the brain, and this photo shows why. Lagiewka’s eyebrow gets all bent out of shape as he heads the ball during the Russian Football League Championship match between FC Dynamo and FC Krylya Sovetov (Lagiewka plays for Sovetov, btw).
Photo Epsilon/Getty Images