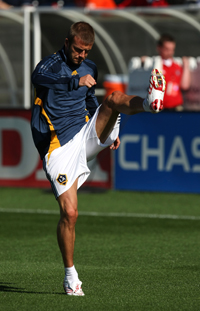 Now that Beckâ€™s first MLS season has ended in an injury plagued anti-climax, he could be on his way back to Blighty to keep his fitness up over the winter.
But the destination could me more low key than his Hollywood introduction as Championship side Ipswich are preparing to invite him to train at Portland Road. The club is within easy reach of â€˜Beckingham Palaceâ€™ and the boss, Jim Magilton, is a good mate of Galaxyâ€™s coach, Frank Yallop.
â€œI will invite David to train with us. Ideally I would also love to have him play a couple of games but I doubt that would be possible,” Magilton told The Telegraph optimistically.
Will a return home get Becks back on track and would you like to see him brighten up training under the glare of paparazzi flashbulbs at your club?