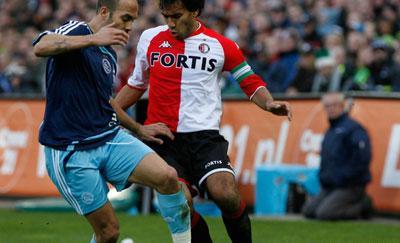 As if the fact that Ajax and Feyenoord are separated at the top of Eredivisie only by goal difference didn’t show us that they are very evenly matched this season, they laboured the point by sharing the spoils in a 2-2 draw at the weekend.
Gio van Bronckhorst opened the scoring for Feyenoord in the first-half, but his goal was cancelled out by Dennis Rommedahl’s strike early in the second-half. Youngster Siem de Jong then gave Ajax the lead before Jonathan de Guzman tucked Theo Lucius’s rebounded penalty away to secure a point for the Rotterdam side.

We know the majority of Pies readers have a penchant for Dutch videos, so here are the highlights from this week’s Eredivisie action: