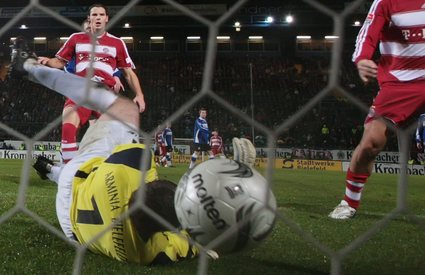 Werder Bremen beat Hamburg 2-1 in Bundesliga’s crunch match this week. The club’s remain in second and third place respectively but the result leaves Hamburg three points behind Werder and four points adrift of Bayern Munich.
The table-toppers maintained their slender advantage in the league as Franck Ribery gave them victory against Arminia Bielefeld. Elsewhere, bottom of the table Cottbus picked up a surprise three points against high-flying Karlsruhe.

Franck Ribery continued his excellent recent run with another goal. He gave Bayern Munich victory with a superbly taken goal against Arminia Bielefeld. Unfortunately the creativity on the pitch is overshadowed in this video by the creativity in the commentary box of GolTV’s Ray Hudson.

0-1 Arminia Bielefeld vs. Bayern Munich Goal by Ri… – MyVideo
So it’s only fair to give you some top Ray quotes after that (all from a two minute video, remember!):
“Brilliant from the Frenchie.”
“Complacency was all over the field in the red shirts..”
“Cartier finish from the Frenchman.”
“This is a brilliant run, let alone the dancing on the ball.”
“Puts him on his back like a turtle.”