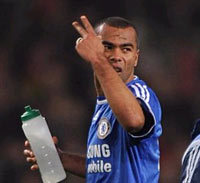 Of course, now it’s purely a rhetorical question. At the time when Cashley and Gallas swapped clubs, in August 2006, it was a legitimate question, although I always thought that the Frenchman was more talented and obviously more versatile than the Englishman.
There can be only one answer today: Arsenal got much the better half of the deal. In Gallas, they have a world-class centre-back and captain in inspirational form. They also have a young left-back who is already better than Cole ever was in a red-and-white shirt. Stand up Gael Clichy, who has been one of the best performers in the Prem so far this season and can be an Arsenal legend, if he chooses to stay at the club for the rest of his career. Cole might have become an Arsenal legend, but his love of money (radix malorum est cupiditas) put paid to that.
The 2007 version of Cole is a long, long way from the likable young man who was once lauded as the world’s best left-back. Now many Chelsea fans would argue that he’s not even the best left-back at Chelsea. Stand up Wayne Bridge.
I almost feel sorry for players like Cole and Frank Lampard, who are detested by the fans of their former clubs, Arsenal and West Ham. It takes a very strong character not to be affected by boos and vicious chants, and it was no great surprise to see Cole flick a v-sign in the direction of Arse fans.