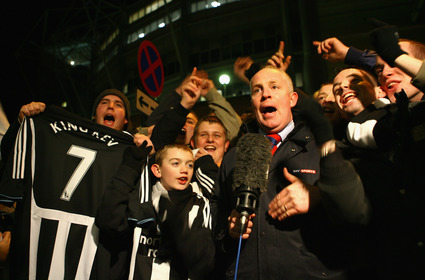 Sky Sports reporter David Craig is mobbed by Newcastle United supporters as he announces the appointment of Kevin Keegan as the club’s new manager, prior to the FA Cup third-round replay between Newcastle and Stoke City at St James’ Park. The Keegan magic didn’t take long to take effect – Newcastle won 4-1, despite playing much of the game with 10 men, after Emre was sent off for a nasty tackle.
Photo Shaun Botterill/Getty Images